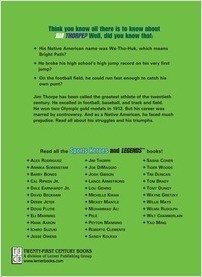 Think you know all there is to know about Jim Thorpe? Well, did you know that:* His Sauk and Fox name was Wa-Tho-Huk, which means Bright Path?* He broke his high school’s high jump record on his very first jump?* On the football field, he could run fast enough to catch his own punt? Jim Thorpe has been called the greatest athlete of the twentieth century. He excelled in football, baseball, and track and field. He won two Olympic gold medals in 1912. But his career was marred by controversy. And as a Native American, he faced much prejudice. Read all about his struggles and his triumphs.