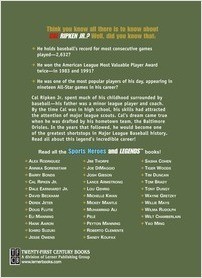 Cal Ripken Jr. spent much of his childhood surrounded by baseball – his father was a minor league player and coach. By the time Cal was in high school, his skills had attracted the attention of major league scouts. Cal’s dream came true when he was drafted by his hometown team, the Baltimore Orioles. In the years that followed, he would become one of the greatest shortstops in Major League Baseball history. Read all about this legend’s incredible career!