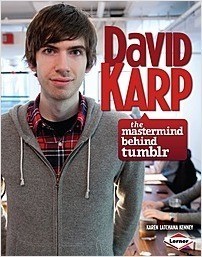 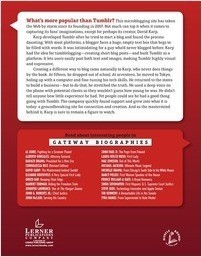 The Mastermind behind Tumblr

What’s more popular than Tumblr? This microblogging site has taken the Web by storm since its founding in 2007. Not much can top it when it comes to capturing its fans’ imaginations, except for perhaps its creator, David Karp.

Karp developed Tumblr after he tried to start a blog and found the process daunting. With most platforms, a blogger faces a huge, empty text box that begs to be filled with words. It was intimidating for a guy who’d never blogged before. Karp had the idea for tumblelogging—creating short blog posts—and built Tumblr as a platform. It lets users easily post both text and images, making Tumblr highly visual and expressive.

Creating a different way to blog came naturally to Karp, who never does things by the book. At fifteen, he dropped out of school. At seventeen, he moved to Tokyo, holing up with a computer and fine-tuning his tech skills. He returned to the states to build a business—but to do that, he stretched the truth. He used a deep voice on the phone with potential clients so they wouldn’t guess how young he was. He didn’t tell anyone how little experience he had. Yet people could see he had a good thing going with Tumblr. The company quickly found support and grew into what it is today: a groundbreaking site for connection and creation. And as the mastermind behind it, Karp is sure to remain a figure to watch.

“Children should delight in Karp’s success at such a young age while easily identifying with his need to stretch the truth about his age and experience to prove his worth.” —School Library Journal

“This slim, trim biography will have real appeal for readers. Not only does it chronicle the life of a young man with whom they can identify but it also provides insight into the social media world that they’re smack in the middle of.” —Booklist 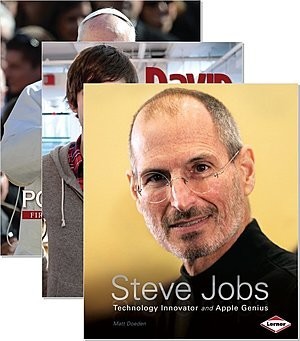