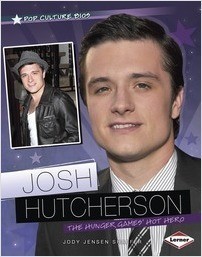 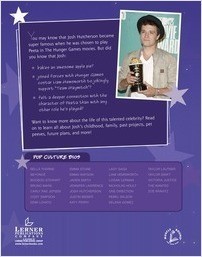 You may know that Josh Hutcherson became super famous when he was chosen to play Peeta in The Hunger Games movies. But did you know that Josh:
• bakes an awesome apple pie?
• joined forces with Hunger Games costar Liam Hemsworth to jokingly support “Team Haymitch”?
• felt a deeper connection with the character of Peeta than with any other role he’s played?

Want to know more about the life of this talented celebrity? Read on to learn all about Josh’s childhood, family, past projects, pet peeves, future plans, and more!

Jody Jensen Shaffer is the author of more than 27 books of fiction and nonfiction for children. She's written about everything from ninja warriors to celebrities to grizzlies. Her picture books include The Way the Cookie Crumbled, Prudence, The Part Time Cow, and A Chip Off the Old Block. Jody’s poetry and short fiction have been published in Highlights, Highlights High Five, Babybug, Clubhouse Jr., Turtle, and Humpty Dumpty, among others. Jody once received a bicycle for winning a haiku contest. Jody lives in Missouri with her husband and children.