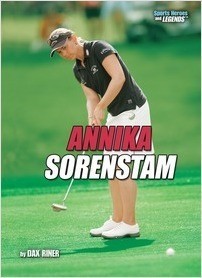 Think you know all there is to know about Annika Sorenstam? Well, did you know that: * The first LPGA tournament she ever won was a major—the 1995 U.S. Open? * As a child, she dreamed of becoming a professional tennis player like Sweden’s Bjorn Borg?* At the 2001 Standard Register PING tournament, she opened a round with eight straight birdies and went on to shoot a score of 59?Sweden’s Annika Sorenstam has become the face of women’s golf. After winning an NCAA title with the University of Arizona, she took on the LPGA Tour. Cool, confident, and consistent, she has assaulted the LPGA record books, winning title after title. She’s even proving that a woman can hold her own alongside the most talented male golfers. Don’t miss her incredible story!

Dax Riner is a proud vegan and an avid sports fan who lives and dies with the Oakland A's; he also enjoys reading, music, and history. Dax lives in Albuquerque, New Mexico, with his wife Adriana and their seven rescue cats.