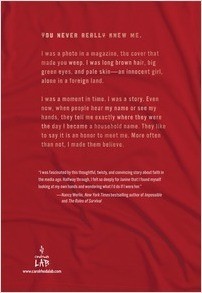 When Janine Collins was six years old, she was the only survivor of a suicide bombing that killed her parents and dozens of others. Media coverage instantly turned her into a symbol of hope, peace, faith—of whatever anyone wanted her to be. Now, on the ten-year anniversary of the bombing, reporters are camped outside her house, eager to revisit the story of the “Soul Survivor.”

Janine doesn’t want the fame—or the pressure—of being a walking miracle. But the news cycle isn’t the only thing standing between her and a normal life. Everyone wants something from her, expects something of her. Even her closest friends are urging her to use her name-recognition for a “worthy cause.” But that’s nothing compared to the hopes of Dave Armstrong—the man who, a decade ago, pulled Janine from the rubble. Now he’s a religious leader whose followers believe Janine has healing powers.

“Believe is an excellent, fast-paced novel, filled with betrayal, hope and faith. Loaded with complex ideas that relate to current events of the day, it would be ideal for book clubs or discussion groups and is highly recommended for ages 12 and up.” —starred, Jewish Book World

“This is a book about faith, friendship, celebrity, family, and what pressure can do to someone. Readers may or may not agree with Janine’s choices, but those choices always ring true.” —School Library Journal

“This is a great novel to spark discussion on current affairs, living up to others’ expectations, and how fame changes lives. Teens will relate to Janine’s search for her place in this world.” —VOYA

“Issues of religion and responsibility get a refreshingly thorny examination in this hard-nosed look at a girl thrust into an unwelcome spotlight….Nuanced relationships and a refusal to accept easy answers make this a strong, unique look at faith.” —Booklist

Sarah Aronson holds an MFA in Writing for Children and Young Adults from Vermont College of Fine Arts. She is the author of three books for kids and teens: Head Case, Beyond Lucky, and her newest novel, Believe. When Sarah is not writing, she teaches online classes at writers.com and is the cofounder and organizer of The Novel Writing Retreat at VCFA. She lives in Evanston, Illinois, with her family. She enjoys cooking, hot yoga, biking and hanging out in Chicago. She drinks way too much coffee. Find out more at her website: www.saraharonson.com.