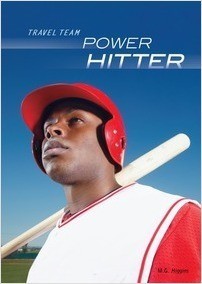 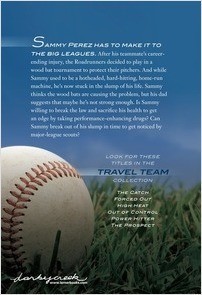 From the Series Travel Team

Sammy Perez has to make it to the big leagues. After his teammate’s career-ending injury, the Roadrunners decided to play in a wood bat tournament to protect their pitchers. And while Sammy used to be a hotheaded, hard-hitting, home-run machine, he’s now stuck in the slump of his life. Sammy thinks the wood bats are causing the problem, but his dad suggests that maybe he’s not strong enough. Is Sammy willing to break the law and sacrifice his health to get an edge by taking performance-enhancing drugs? Can Sammy break out of his slump in time to get noticed by major-league scouts?

“The Roadrunners travel baseball team encounters daunting opponents on the field while tensions off the field threaten the team’s solidarity. Dustin’s father blackmails the coach; Sammy loses his power hitting when forced to switch from aluminum to wood bats; Trip alienates his father when he considers pursuing music instead of the major leagues. Crisp dialogue and personal challenges keep this series alive for baseball fans.”

“Just the ticket for readers who prefer their sports fiction distraction-free.” —Booklist

“These authors pack a lot of drama and sports action into about 100 pages…. Students will appreciate the real-life issues and ethical dilemmas that the players face.” —School Library Journal

M. G. Higgins writes fiction for children and young adults. She's loved baseball since she went to her first Dodger's game at the age of six.