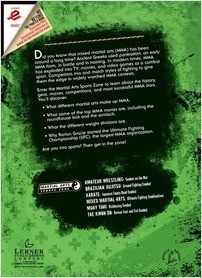 Did you know that mixed martial arts (MMA) has been around a long time? Ancient Greeks used pankration, an early MMA form, in battle and in training. In modern times, MMA has exploded into TV, movies, and video games as a combat sport. Competitors mix and match styles of fighting to give them the edge in widely watched MMA contests.

Enter the Martial Arts Sports Zone to learn about the history, gear, moves, competitions, and most successful MMA stars. You’ll discover:
• What different martial arts make up MMA.
• What some of the top MMA moves are, including the roundhouse kick and the armlock.
• What the different weight divisions are.
• Why Rorion Gracie started the Ultimate Fighting Championship (UFC), the largest MMA organization.

Are you into sports? Then get in the zone!

“Students who are fascinated by martial arts will find much to enjoy in this series…. Action-packed photographs and interesting sidebars will keep readers engaged.” —School Library Journal, Series Made Simple

This action-packed, fun, fact-filled overview will take a high-interest approach to martial arts. Readers will get an introduction to famous martial artists, necessary equipment and gear, and various competitions within the genre. Famous movies and TV shows will also be highlighted where View available downloads →