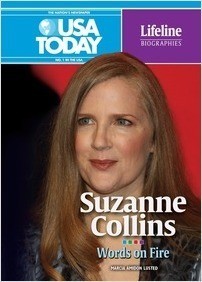 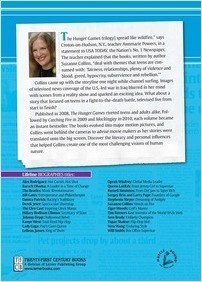 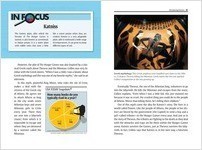 “[The Hunger Games trilogy] spread like wildfire,” says Annmarie Powers, a teacher in Croton-on-Hudson, N.Y., in a statement to USA TODAY, the Nation’s No. 1 Newspaper. The teacher explained that the books, written by author Suzanne Collins, “deal with themes that teens are consumed with: ‘fairness, relationships, plenty of violence and blood, greed, hypocrisy, subservience and rebellion.’”

Collins came up with the storyline one night while channel surfing. Images of televised news coverage of the U.S.-led war in Iraq blurred in her mind with scenes from a reality show and sparked an exciting idea. What about a story that focused on teens in a fight-to-the-death battle, televised live from start to finish?

Published in 2008, The Hunger Games riveted teens and adults alike. Followed by Catching Fire in 2009 and Mockingjay in 2010, each volume became an instant bestseller. The books evolved into major motion pictures, and Collins went behind the cameras to advise movie makers as her stories were translated onto the big screen. Discover the literary and personal influences that helped Collins create one of the most challenging visions of human nature.and rebellion.’"