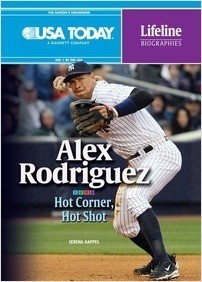 In 2010 Alex Rodriquez achieved a major milestone. He became the seventh person in Major League Baseball (MLB) history—and the youngest—to hit 600 home runs. The previous year had also been stellar—for both him and his New York Yankee team. As USA TODAY, the Nation’s No. 1 Newspaper, puts it, “Rodriguez, baseball’s richest and perhaps greatest all-around player with three MVP awards, finally got his proudest possession—a World Series championship.”

Known as A-Rod, the baseball phenom was born in New York but grew up in Miami. In 1993, at age 18, he was drafted by the Seattle Mariners and earned his first All Star selection three years later. He joined the Texas Rangers in 2000. In Texas he slugged home runs, stole bases, and won awards. A-Rod was traded to the New York Yankees in 2004, where he switched from shortstop to third base. Find out how a skinny kid with big dreams became one of the highest paid and most successful players in the big leagues.