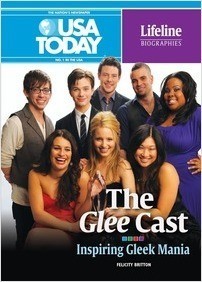 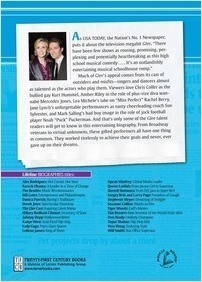 As USA TODAY, the Nation’s No. 1 Newspaper, puts it about the television megahit Glee, “There have been few shows as rousing, promising, perplexing and potentially heartbreaking as this high school musical comedy….It’s an outlandishly entertaining musical schoolhouse romp.”

Much of Glee’s appeal comes from its cast of outsiders and misfits—singers and dancers almost as talented as the actors who play them. Viewers love Chris Colfer as the bullied gay Kurt Hummel, Amber Riley in the role of plus-size diva wannabe Mercedes Jones, Lea Michele’s take on “Miss Perfect” Rachel Berry, Jane Lynch’s unforgettable performances as nasty cheerleading coach Sue Sylvester, and Mark Salling’s bad boy image in the role of jock football player Noah “Puck” Puckerman. And that’s only some of the Glee talent readers will get to know in this entertaining biography. From Broadway veterans to virtual unknowns, these gifted performers all have one thing in common. They worked tirelessly to achieve their goals and never, ever gave up on their dreams.

“Thirteen actors from the TV show are superficially profiled in what amounts to an extended magazine article. In fact, related USA Today articles—about the actors and about issues such as obesity and gay teens—serve as sidebars to the main text. Glee fans will appreciate the quotes from their favorite stars; the many celeb photos add interest.” —The Horn Book Guide