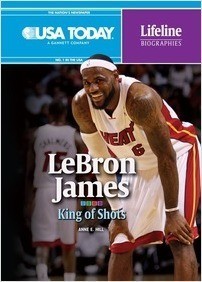 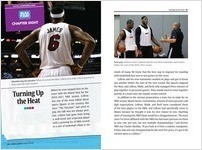 Whether he’s soaring through the air for a powerful slam dunk, threading the ball to a teammate for a key shot, or launching a new pair of Nikes, the Miami Heat’s LeBron James is one of the most exciting athletes in the world. As USA TODAY, the Nation’s No. 1 Newspaper, puts it, “He is hailed as the successor to Michael Jordan’s marketing throne off the court. On the court, he is frequently compared to Magic Johnson because of his size, floor vision and passing ability.”

LeBron was a famous basketball player before he ever set foot on an NBA court. Predicted to be one of the game’s best players since childhood, LeBron appeared on magazine covers as a teenager, and his high school games aired on national television. The hype rose to a new level when his hometown Cleveland Cavaliers chose LeBron with the first pick in the 2003 NBA draft. The high-flying forward played seven seasons in Cleveland before joining the Miami Heat in 2010, and LeBron immediately helped his new team reach the NBA Finals. Find out how a skinny kid from Akron, Ohio, became one of the NBA’s biggest stars.

Award-winning author Anne E. Hill has written more than a dozen books for kids and teens. She lives outside of Philadelphia, Pennsylvania, with her husband and children.