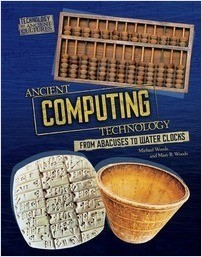 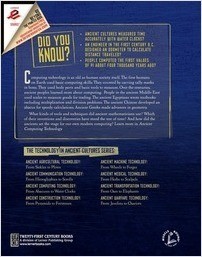 From Abacuses to Water Clocks

Did you know . . .
• Ancient cultures measured time accurately with water clocks?
• An engineer in the first century B.C. designed an odometer to calculate distance traveled?
• People computed the first values of pi about four thousand years ago?

Computing technology is as old as human society itself. The first humans on Earth used basic computing skills. They counted by carving tally marks in bone. They used body parts and basic tools to measure. Over the centuries, ancient peoples learned more about computing. People in the ancient Middle East used scales to measure goods for trading. The ancient Egyptians wrote textbooks including multiplication and division problems. The ancient Chinese developed an abacus for speedy calculations. Ancient Greeks made advances in geometry.

What kinds of tools and techniques did ancient mathematicians use? Which of their inventions and discoveries have stood the test of time? And how did the ancients set the stage for our own modern computing? Learn more in Ancient Computing Technology.