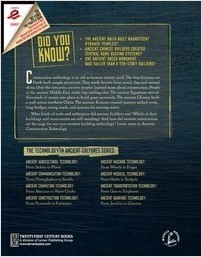 From Pyramids to Fortresses

Construction technology is as old as human society itself. The first humans on Earth built simple structures. They made houses from wood, clay, and animal skins. Over the centuries, ancient peoples learned more about construction. People in the ancient Middle East made clay roofing tiles. The ancient Egyptians moved thousands of stones into place to build giant pyramids. The ancient Chinese built a wall across northern China. The ancient Romans created massive arched roofs, long bridges, strong roads, and systems for moving water.

What kinds of tools and techniques did ancient builders use? Which of their buildings and monuments are still standing? And how did ancient construction set the stage for our own modern building technology? Learn more in Ancient Construction Technology.