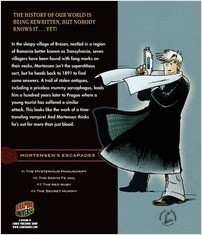 From the Series Mortensen's Escapades

In the sleepy village of Brasov, nestled in a region of Romania better known as Transylvania, seven villagers have been found with fang marks on their necks. Mortensen isn’t the superstitious sort, but he heads back to 1891 to find some answers. A trail of stolen antiques, including a priceless mummy sarcophagus, leads him a hundred years later to Prague where a young tourist has suffered a similar attack. This looks like the work of a time-traveling vampire! And Mortensen thinks he’s out for more than just blood.