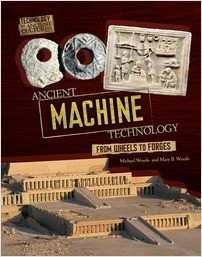 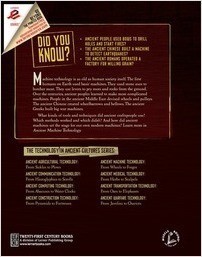 From Wheels to Forges

Did you know . . .
• Ancient people used bows to drill holes and start fires?
• The ancient Chinese built a machine to detect earthquakes?
•The ancient Romans operated a factory for milling grain?

Machine technology is as old as human society itself. The first humans on Earth used basic machines. They used stone axes to butcher meat. They use levers to pry roots and rocks from the ground. Over the centuries, ancient peoples learned to make more complicated machines. People in the ancient Middle East devised wheels and pulleys. The ancient Chinese created wheelbarrows and bellows. The ancient Greeks built big war machines.

What kinds of tools and techniques did ancient craftspeople use? Which methods worked and which didn’t? And how did ancient machines set the stage for our own modern machines? Learn more in Ancient Machine Technology.

“Each book is well written and understandable, offering a simplified look at occasionally complex scientific, historical, and geographical information. The authors’ style and language flow as they define words when needed and at other times use descriptive details or modern comparisons to make things clear. Adding strength and flavor to the authors’ prose, each volume includes actual quotes from ancient texts and historical observers…. Teachers and librarians will find these valuable resources, and teens steeped in today’s modern technology will be interested to see the creativity of ancient peoples.” —VOYA

“The information in this series would be very good for a cross–curricular lesson, for example relating science to social studies.” —NSTA