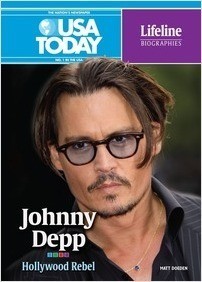 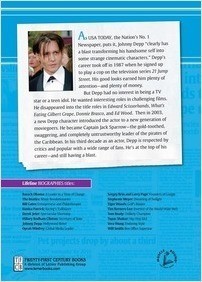 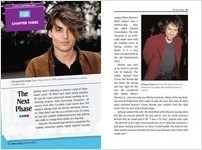 As USA TODAY, The Nation’s No. 1 Newspaper, puts it, Johnny Depp “clearly has a blast transforming his handsome self into some strange cinematic characters.” Depp’s career took off in 1987 when he signed up to play a cop on the television series 21 Jump Street. His good looks earned him plenty of attention—and plenty of money. But Depp had no interest in being a TV star or a teen idol. He wanted interesting roles in challenging films. He disappeared into the title roles in Edward Scissorhands, What’s Eating Gilbert Grape, Donnie Brasco, and Ed Wood. Then in 2003, a new Depp character introduced the actor to a new generation of moviegoers. He became Captain Jack Sparrow—the gold-toothed, swaggering, and completely untrustworthy leader of the Pirates of the Caribbean. In his third decade as an actor, Depp is respected by critics and popular with a wide range of fans. He’s at the top of his career—and still having a blast.

“Readers will come away not only with a greater knowledge of the subjects, but also with an understanding of their places in their respective industries. Relevant images and engaging sidebars enhance the presentation.” —The Horn Book Guide