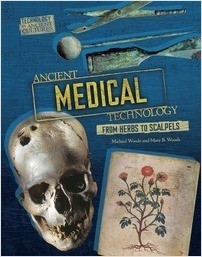 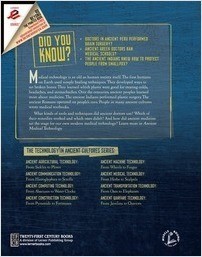 From Herbs to Scalpels

Medical technology is as old as human society itself. The first humans on Earth used simple healing techniques. They developed ways to set broken bones. They learned which plants were good for treating colds, headaches, and stomachaches. Over the centuries, ancient peoples learned more about medicine. The ancient Indians performed plastic surgery. The ancient Romans operated on people’s eyes. People in many ancient cultures wrote medical textbooks.

What kinds of tools and techniques did ancient doctors use? Which of their remedies worked and which ones didn’t? And how did ancient medicine set the stage for our own modern medical technology? Learn more in Ancient Medical Technology.

“The design is modern, with text supported by sidebars, quotes, and colorful photographs and captioned illustrations. The authors (a medical journalist and a school librarian) explore not only what early health care was but what archaeology has revealed about it, and include a time line, a glossary, source notes, and print and electronic bibliographies, all fully indexed.” —Booklist

“The information in this series would be very good for a cross–curricular lesson, for example, relating science to social studies.” —NSTA