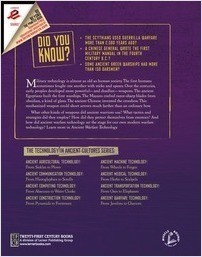 From Javelins to Chariots

Did you know . . .
• The Scythians used guerrilla warfare more than 2,500 years ago?
• The Chinese general Sun-tzu wrote the first military manual in the fourth century B.C.?
• Some ancient Greek warships had more than 150 oarsmen?

Military technology is almost as old as human society. The first humans sometimes fought one another with sticks and spears. Over the centuries, early peoples developed more powerful—and deadlier—weapons. The ancient Egyptians built the first warships. The Mayans crafted razor-sharp blades from obsidian, a kind of glass. The ancient Chinese invented the crossbow. This mechanized weapon could shoot arrows much farther than an ordinary bow.