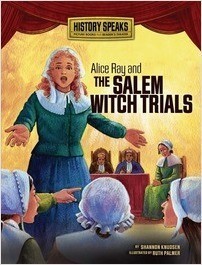 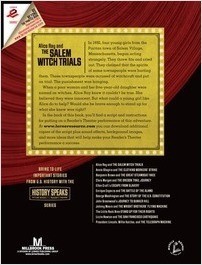 In 1692, four young girls from the Puritan town of Salem Village, Massachusetts, began acting strangely. They threw fits and cried out. They claimed that the spirits of some townspeople were hurting them. These townspeople were accused of witchcraft and put on trial. The punishment was hanging. When a poor woman and her five-year-old daughter were named as witches, Alice Ray knew it couldn’t be true. She believed they were innocent. But what could a young girl like Alice do to help? Would she be brave enough to stand up for what she knew was right? In the back of this book, you’ll find a script and instructions for putting on a reader’s theater performance of this adventure. At our companion website—www.lerneresource.com—you can download additional copies of the script plus sound effects, background images, and more ideas that will help make your reader’s theater performance a success.

Ruth Palmer studied Art and Illustration at Harrow College of Art, Middlesex, England. She first worked as a story illustrator for magazines and also gained experience in advertising and design. She has been illustrating for twenty years, and she has illustrated both educational and fictional titles in the UK and the USA. Ruth lives with her husband and teenage daughter in the beautiful Devon countryside in England.