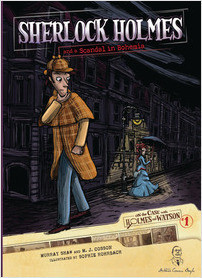 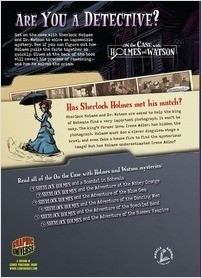 Sherlock Holmes and a Scandal in Bohemia

From the Series On the Case with Holmes and Watson

Has Sherlock Holmes met his match?
Sherlock Holmes and Dr. Watson are asked to help the King of Bohemia find a very important photograph. It won’’t be easy. The King’s former love, Irene Adler, has hidden the photograph. Holmes must don a clever disguise, stage a brawl, and even fake a house fire to find the mysterious image! But has Holmes underestimated Irene Adler?

“Adapting Holmes stories into comics is very challenging, which makes these books all the more impressive.” —Teacher Librarian

“These graphic novel–style adaptations of Holmes’s adventures are well suited to middle graders. The dialogue is reminiscent of Conan Doyle’s writing yet easier to follow. The illustrations’ cartoon characters are appealing, but the heavy black lines and dark palette are sometimes intrusive.” —The Horn Book Guide

“This story is an inspired choice for a series opener not just because it was the first Holmes short story published (following two novels) but also because it establishes right off the bat something that may surprise readers: a fallible Holmes.” —Booklist

French artist Sophie Rohrbach began her career after graduating in display design at the Chambre des Commerce. She went on to design displays in many top department stores, including Galeries Lafayette. She also studied illustration at the Emile Cohl school in Lyon, France, where she now lives with her daughter. Rohrbach has illustrated many children's books.

On the Case with Holmes and Watson

Get ready to jump on the case with Holmes and Watson! This graphic novel series presents the thrilling adventures of the world’s greatest detective, Sherlock Holmes, and his assistant, John H. Watson. At the end of each book, readers examine the clues that helped Holmes solve each… View available downloads →