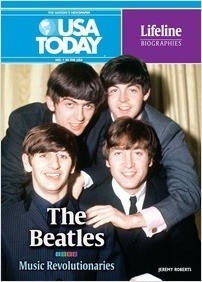 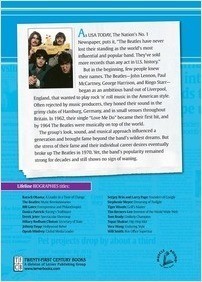 As USA TODAY, The Nation’s No. 1 Newspaper, puts it, “The Beatles have never lost their standing as the world’s most influential and popular band. They’ve sold more records than any act in U.S. history.” But in the beginning, few people knew their names. The Beatles—John Lennon, Paul McCartney, George Harrison, and Ringo Starr—began as an ambitious band out of Liverpool, England, that wanted to play rock ‘n’ roll music in the American style. Often rejected by music producers, they honed their sound in the grimy clubs of Hamburg, Germany, and in small venues throughout Britain. In 1962, their single “Love Me Do” became their first hit, and by 1964 The Beatles were musically on top of the world. The group’s look, sound, and musical approach influenced a generation and brought fame beyond the band’s wildest dreams. But the stress of their fame and their individual career desires eventually broke up The Beatles in 1970. Yet, the band’s popularity remained strong for decades and still shows no sign of waning.

“Readers will come away not only with a greater knowledge of the subjects, but also with an understanding of their places in their respective industries. Relevant images and engaging sidebars enhance the presentation.” —The Horn Book Guide

“The Beatles might not make the kids crazy like they once did, but there’s no doubt that anyone seriously interested in music needs to know about rock’s foremost revolutionaries…. Pertinent articles culled from USA Today and plenty of photographs make this as easy on the eyes as it is fun to read.” —Booklist