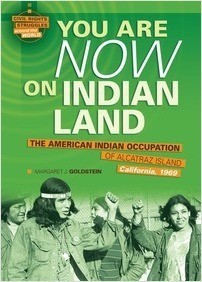 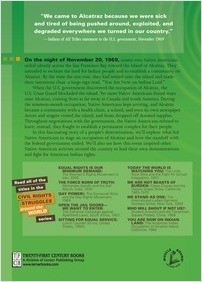 You Are Now on Indian Land

On the night of November 20, 1969, ninety-two Native Americans sailed silently across the San Francisco Bay toward the island of Alcatraz. They intended to reclaim the land for Indian people and to establish a community on Alcatraz. By the time the sun rose, they had settled onto the island and made their intentions clear: a large sign read, “You Are Now on Indian Land. When the U.S. government discovered the occupation of Alcatraz, the U.S. Coast Guard blockaded the island. Yet more Native Americans found ways onto Alcatraz, coming from as far away as Canada and South America. During the nineteen-month occupation, Native Americans kept arriving, and Alcatraz became a community with a health clinic, a school, and even its own newspaper. Actors and singers visited the island, and boats dropped off donated supplies. Throughout negotiations with the government, the Native Americans refused to leave; instead, they fought to establish a permanent complex for their people. In this fascinating story of a people’s determination, we’ll explore what led Native Americans to stage an occupation of Alcatraz and how the standoff with the federal government ended. We’ll also see how this event inspired other Native American activists around the country to lead their own demonstrations and fight for American Indian rights.