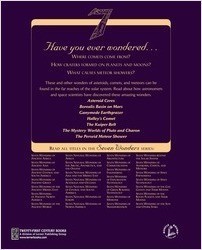 From earliest times, humans have wondered about the sky above them and have studied all visible objects. People began to identify differences between stars and planets, and as technology advanced with telescopes and space probes, they sought deeper understanding of the millions of bits of debris rocketing through the solar system. Scientists determined that most of these objects are left over from the creation of the planets and their moons. They classified these leftovers into categories such as asteroids, comets, and meteors.

In this book, we’ll explore seven wonders of asteroids, comets, and meteors. Ceres is a huge mountain-sized asteroid that orbits with other asteroids between Mars and Jupiter. Other marvels include Ganymede, the largest asteroid in the group called Earthgrazers or Near-Earth Objects, and Halley’s comet, a ball of ice, that passes Earth every seventy-five or so years.

We’ll also explore the amazing impact that space debris can have on planets and moons. The Borealis Basin, a wondrous crater more than 5,000 miles across, formed when an asteroid collided with Mars in the ancient past.

Then we will travel to the far-off Kuiper belt, where as many as 200 million icy bodies orbit, and wonder at the mystery of planetlike objects, such as Pluto and Charon. Finally, we’ll can experience a space wonder firsthand by standing outside on a night in August to watch the spectacular Perseid meteor shower fill the sky.