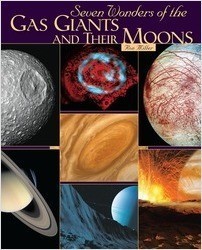 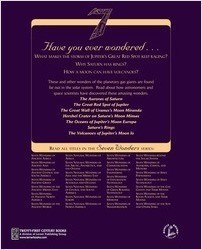 Seven Wonders of the Gas Giants and Their Moons

From earliest times, humans have wondered about the sky above them. Simple telescopes in the 1600s made possible descriptions of the wonders of Earth’s Moon and the closer planets. It took the development of powerful telescopes and modern space probes to learn more about the more distant planets—Jupiter, Saturn, Uranus, and Neptune.
In this book, we’ll explore seven wonders of these four enormous planets—called the gas giants—and their moons. On Saturn, we’ll examine its amazing rings and their properties. On Jupiter, we’ll investigate the Great Red Spot—a gigantic storm about twice the size of Earth that has lasted for centuries.
We’ll also explore a moon of Jupiter with erupting volcanoes, a moon of Uranus covered with one of the weirdest landscapes in the solar system, a huge crater on a tiny moon of Saturn, as well as planet auroras much more spectacular than Earth’s northern lights. We’ll also consider how the discovery of water on Jupiter’s moon Europa may mean that life is possible in other worlds.

“In these well-organized volumes, Miller covers the basics of planetary science and star formation in addition to looking more closely at interesting elements of the bodies in the solar system (e.g., rings of Saturn, mountains on Mars). Sharp color-enhanced images and artist renderings portray planetary and stellar features for astronomy buffs.” —The Horn Book Guide

“The book is packed with good, accurate information and is a quite complete presentation despite its small size. I enthusiastically recommend this title highly.” —Science Books & Films

“This book is highly recommended for the capable and/or talented reader in middle school, and up through high school. The text is readable but the content is deep and the information is wide–ranging and detailed. It would provide many anecdotes and interesting detail for the teacher who gives mini–lectures as well.” —NSTA

“Both newly starstruck readers and confirmed students of the heavens will find plenty to marvel over in these volumes.” —School Library Journal