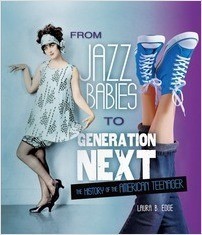 From Jazz Babies to Generation Next

The History of the American Teenager

From the Series People's History

Can you imagine a world without teenagers?

Before the early 1900s, the word teenager was not even part of the American vocabulary. The concept of adolescence—those transitional years between childhood and adulthood—simply did not exist. Instead, families needed young people to contribute to the family’s earnings as soon as possible. “Everybody worked; it was a part of life, for there was no life without it,” wrote Edna Matthews Clifton of her teen years in Texas in the late 1800s. Many young people worked longs days and full weeks on farms or in factories. Such a schedule left little time for school or for fun.

Throughout the 1900s, the idea of the teenager gradually began to take shape. A series of reforms put restrictions on child labor. Young people spent less time working and more time in school. They also began spending money on entertainment. Movie theaters and dance halls provided places for them to gather. Thirteen- to nineteen-year-olds established a unique culture that would continue to develop in the coming decades.

In the twenty-first century, teens represent vital threads in the American fabric. Their spending choices affect both the economy and the way advertisers market products. Their taste in music, movies, and TV drives pop culture. And teens—for whom technology is a way of life—are the ones who will continue to push the boundaries of our technological future.

From the flappers and jazz babies of the 1920s to the digital-savvy teens of the twenty-first century, you’re about to follow the fascinating evolution of the American teenager.

“This informative and entertaining volume recounts the history of American teenagerdom. Originally considered to be ‘young vagabonds,’ American teens defined the culture of their times, from the 1920s Jazz Age to the Digital Age of the 1980s and 1990s. The text celebrates the vulnerability and passions of America’s youth and its ability to implement change. Well-chosen photographs enhance the presentation.” —The Horn Book Guide

“Readers are in for a treat as they travel through the past with this fascinating resource.” —Library Media Connection

Laura B. Edge was born just north of Chicago in Waukegan, Illinois. She grew up in a big Italian-Irish family with lots of brothers and sisters. She loves to read, travel, dance, ride horses, and watch basketball games. Laura received her bachelor's degree in education from the University of Texas at Austin and studied abroad with the American Institute of Foreign Study. Laura has taught reading and writing in elementary schools, middle schools, and at a community college. In addition to teaching, Laura has worked as a computer programmer and owned and operated a computer training company. Laura uses her love of history to create books that bring the past to life. She enjoys research and uncovering little known facts.