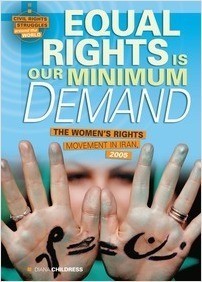 Equal Rights Is Our Minimum Demand

The Women's Rights Movement in Iran, 2005

“We want to live, we do not want to face persecution for expressing our political opinion; as women we don’t want to walk on the street with the constant horror that we could be intimidated for showing an inch of hair.”
—Narges Kalhor, a young Iranian filmmaker, October 2009

On June 12, 2005, hundreds of women gathered outside Tehran University in Tehran, Iran. These women were protesting an issue that Iranian women have battled for more than one hundred years: gender inequality. Living in a conservative Muslim culture, Iranian women are subjected to discriminatory laws that serve the male-dominated society. In public, Iranian women must not be seen with men not related to them, and they must wear clothing completing covering their body and their hair. Many laws punish women even more harshly. If a woman is caught committing adultery, she can be sentenced to death by stoning. Yet men are free to have many wives and even enter temporary marriages.

In the 1900s, Iranian women began protesting unjust laws and fighting for equality. For a time, under monarchs wishing to modernize, Iran became more lenient. Women began dressing as they wished, mixing socially with men, and working outside their homes. But after the Islamic Revolution of 1979, harsh punishments for moral offenses again became law. Women in professional occupations lost their jobs, and gender separation was enforced in public places. Iranian women continue to struggle against an oppressive regime, but they refuse to stop protesting.

In this powerful story, we’ll learn how Iranian women have been punished and discriminated against by their patriarchal government, but yet they maintain their pursuit of equal rights. We’ll also see what their hopes and dreams are for the future.