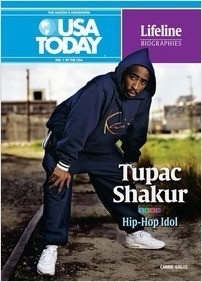 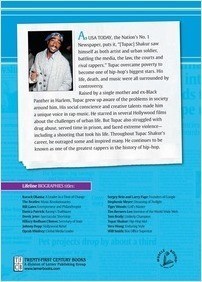 As USA TODAY, the Nation’s No. 1 Newspaper, puts it, “[Tupac] Shakur saw himself as both artist and urban soldier, battling the media, the law, the courts and rival rappers.” Tupac overcame poverty to become one of hip-hop’s biggest stars. His life, death, and music were all surrounded by controversy.
Raised by a single mother and ex-Black Panther in Harlem, Tupac grew up aware of the problems in society around him. His social conscience and creative talents made him a unique voice in rap music. He starred in several Hollywood films about the challenges of urban life. But Tupac also struggled with drug abuse, served time in prison, and faced extreme violence―including a shooting that took his life. Throughout Tupac Shakur’s career, he outraged some and inspired many. He continues to be known as one of the greatest rappers in the history of hip-hop.