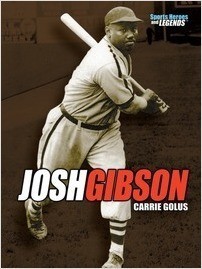 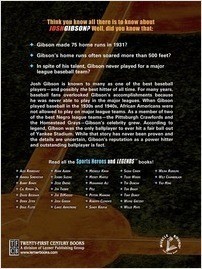 Think you know all there is to know about Josh Gibson? Well, did you know that Gibson made 75 home runs in 1931? Did you know that Gibson’s home runs often soared more than 500 feet? In spite of his talent, Gibson never played for a major league baseball team? Josh Gibson is known to many as one of the best baseball players―and possibly the best hitter, of all time. For many years, baseball fans overlooked Gibson’s accomplishments because he was never able to play in the major leagues. When Gibson played baseball in the 1930s and 1940s, African Americans were not allowed to play on major league teams. As a member of two of the best Negro league teams―the Pittsburgh Crawfords and the Homestead Grays―Gibson’s celebrity grew. According to legend, Gibson was the only ballplayer to ever hit a fair ball out of Yankee Stadium. While that story has never been proven and the details are uncertain, Gibson’s reputation as a power hitter and outstanding ballplayer is fact.