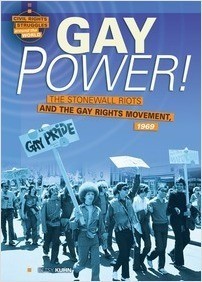 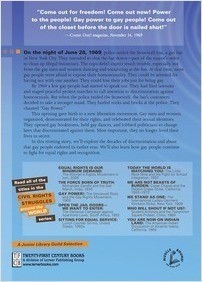 The Stonewall Riots and the Gay Rights Movement, 1969

“Come out for freedom! Come out now! Power to the people! Gay power to gay people! Come out of the closet before the door is nailed shut!”
—Come Out! magazine, November 14, 1969

On the night of June 28, 1969, police raided the Stonewall Inn, a gay bar in New York City. They intended to shut the bar down—part of the mayor’s order to clean up illegal businesses. The cops didn’t expect much trouble, especially not from the gay men and women dancing and socializing at the bar. At that time, most gay people were afraid to expose their homosexuality. They could be arrested for having sex with one another. They could lose their jobs just for being gay.

By 1969 a few gay people had started to speak out. They had filed lawsuits and staged peaceful protest marches to call attention to discrimination against homosexuals. But when the police raided the Stonewall, the bar’s customers decided to take a stronger stand. They hurled rocks and bricks at the police. They chanted “Gay Power.”

This uprising gave birth to a new liberation movement. Gay men and women organized, demonstrated for their rights, and celebrated their sexual identities. They opened gay bookstores, held gay dances, and lobbied politicians to change laws that discriminated against them. Most important, they no longer lived their lives in secret.

In this riveting story, we’ll explore the decades of discrimination and abuse that gay people endured in earlier eras. We’ll also learn how gay people continue to fight for equal rights and recognition.

Betsy Kuhn has written many books for young adult readers, including Prying Eyes: Privacy in the Twenty-First Century, and The Force Born of Truth: Mohandas Gandhi and the Salt March. She lives in Maryland with her family.