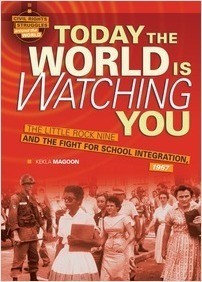 Today the World Is Watching You

The Little Rock Nine and the Fight for School Integration, 1957

On September 4, 1957, nine African American teenagers made their way toward Central High School in Little Rock, Arkansas. They didn’t make it very far. Armed soldiers of the Arkansas National Guard blocked most of them at the edge of campus. The three students who did make it onto campus faced an angry mob. White citizens spit at them and shouted ugly racial slurs. No black students entered Central that day. And if the angry mob had its way, black children would never attend school with white children. But the U.S. Supreme Court had ruled in 1955 that school segregation—that is, separate schools for black children and white children—was unconstitutional. The Court ordered the nation’s schools to be integrated. Nowhere was that process more hateful and more horrific than in Little Rock. Eventually, the nine students did make it into Central High—under the protection of army soldiers. Once inside Central, they faced a never-ending torrent of abuse from white students. But the nine students persevered. Their courage inspired the growing movement for African American civil rights.

“Magoon chronicles events related to the integration of Little Rock’s Central High School in 1957. The bold courage displayed by the nine students and their parents in the face of extreme hostility is concisely told. Many poignant news photographs enhance the information-rich text. A concluding ‘Lessons of Little Rock’ chapter updates the story.” —The Horn Book Guide

“Readers may be familiar with this historic event, but Magoon provides a deeper look into the students’ lives and discusses the isolation, frustrations, and very real dangers they faced both inside and outside of Central High School…. An ideal purchase for research purposes.” —School Library Journal

Kekla Magoon is the Coretta Scott King/John Steptoe Award-winning author of The Rock and the River, the author of Coretta Scott King Author Honor Book The Season of Styx Malone, author of Printz Honor Book Revolution in Our Time, and co-author of the 2016 Coretta Scott King Author Honor Book and National Book Award Longlist selection X: A Novel with Ilyasah Shabazz. She holds a B.A. in history from Northwestern University and a master of fine arts in writing from Vermont College of Fine Arts, where she now serves on faculty. In 2021 she won the Margaret A. Edwards Award for lifetime achievement and contribution to children's literature. Kekla visits schools and libraries around the country to speak about her work, and she teaches writing workshops to youth and adults.