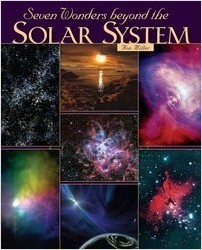 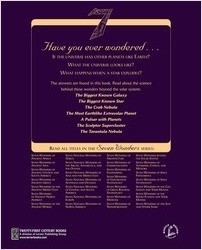 Seven Wonders beyond the Solar System

From earliest times, humans have wondered about the sky above them. People looked at distant stars and wondered what they were made of. They wondered whether any other places in the universe were like Earth. At first people used simple telescopes to study the solar system—the Sun and all the planets that circle around it. Later, more powerful telescopes and high-tech machines allowed people to investigate worlds outside the solar system.
In this book, we’ll explore seven wonders beyond the solar system. We’ll look at giant clouds of gas and dust called nebulae. Some nebulae are places where stars are born. Other nebulae are all that remains of stars that have died. Other wonders beyond the solar system include pulsing stars, giant stars, and giant clusters of stars called galaxies. We’ll visit them all.
And we’ll explore the age-old question: Does the universe have any other planets like Earth? We’ll learn about scientists who hunt for Earthlike planets and the tools they use. Finally, we’ll look at the big picture—the universe itself. This vast network of stars, planets, and other objects is the biggest wonder of them all.

“In these well-organized volumes, Miller covers the basics of planetary science and star formation in addition to looking more closely at interesting elements of the bodies in the solar system (e.g., rings of Saturn, mountains on Mars). Sharp color-enhanced images and artist renderings portray planetary and stellar features for astronomy buffs.” —The Horn Book Guide

“This book is highly recommended for the capable and/or talented reader in middle school, and up through high school. The text is readable but the content is deep and the information is wide–ranging and detailed. It would provide many anecdotes and interesting detail for the teacher who gives mini–lectures as well.” —NSTA

“Both newly starstruck readers and confirmed students of the heavens will find plenty to marvel over in these volumes.” —School Library Journal