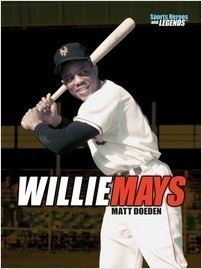 Think you know all there is to know about Willie Mays? Well, did you know that:
•He once batted .477 in the minor leagues?
•He won twelve straight Gold Glove awards?
•He was the first African American team captain in major-league history?
Willie Mays started his baseball career in the little-known Negro Leagues in 1948. He crossed over to the major leagues with the New York Giants in 1951. During the 1954 World Series, Mays stunned the baseball world with an unbelievable over-the-shoulder catch. That play launched him into superstardom. He stayed with the Giants for more than twenty years, first in New York and then in San Francisco. Along the way, he earned his place in the record books, tallying the fourth-highest home run total in major-league history. Find out how Willie Mays made it to the top of his game and stayed there.