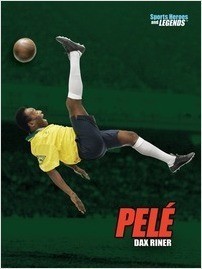 Think you know all there is to know about Pelé? Well, did you know that Pelé played in his first World Cup tournament at the age of seventeen? Did you know that in 1967, both sides in Nigeria’s civil war called a 48-hour cease-fire so Pelé could play an exhibition match in the capital of Lagos? Did you know that Pelé has scored more than 1,200 goals in his professional career? Born into poverty in Três Corações, Brazil, Edson Arantes do Nascimento (aka Pelé) fell in love with soccer at a young age. When he was ten, Pelé and some friends started a soccer team. A year later, a coach took notice of his talent and began to train him. By the time he was just fifteen, Pelé had joined a professional team. This was the beginning of a long career in which Pelé led Brazil to victory in three World Cup tournaments. Pelé became an international celebrity whose name was synonymous with soccer. His fame allowed him to raise awareness of his beloved game around the world.

Dax Riner is a proud vegan and an avid sports fan who lives and dies with the Oakland A's; he also enjoys reading, music, and history. Dax lives in Albuquerque, New Mexico, with his wife Adriana and their seven rescue cats.