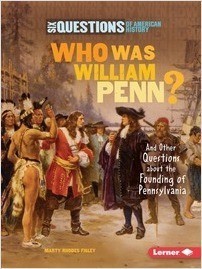 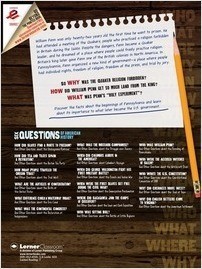 Who Was William Penn?

And Other Questions about the Founding of Pennsylvania

William Penn was only twenty-two years old the first time he went to prison. He had attended a meeting of the Quakers, people who practiced a religion forbidden in Britain during the 1600s. Despite the dangers, Penn became a Quaker leader, and he dreamed of a place where people could freely practice religion. Britain’s king later gave Penn one of the British colonies in North America. In Pennsylvannia, Penn organized a new kind of government—a place where people had individual rights, freedom of religion, freedom of the press, and trial by jury.

So why was the Quaker religion forbidden?
How did William Penn get so much land from the king?
What was Penn’s “holy experiment”?

Discover the facts about the beginnings of Pennsylvania and learn about its importance to what later became the U.S. government.