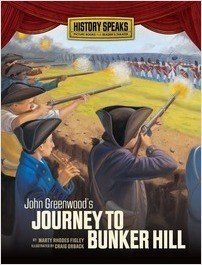 In mid-May 1775, the American Revolution was barely a month old. Many British soldiers were in Boston, Massachusetts. The American troops were nearby. The next battle could break out at any moment.

Fifteen-year-old John Greenwood’s parents lived in Boston. But John lived with his uncle 150 miles away. When the war started, he decided to go back to Boston to check on his family. But when he arrived, the British soldiers wouldn’t let anyone into the city. Instead John joined the American army and soon found himself at the Battle of Bunker Hill. Did John have the courage to make it through the battle? Could the Americans beat the powerful British?

“The series could be useful in classrooms to engage reluctant historians.” —The Horn Book Guide

“These very readable stories personalize important events and give children a feel for the times they take place. Easier to approach than historical novels, these books will appeal to children encountering the great events of American history for the first time…. These books make history come alive in a unique and interesting way.” —Library Media Connection