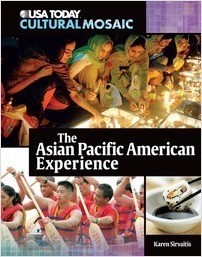 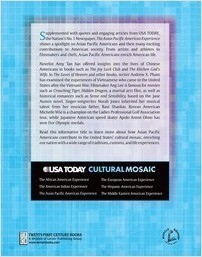 Novelist Amy Tan has offered insights into the lives of Chinese Americans in books such as The Joy Luck Club and The Kitchen God’s Wife. In The Eaves of Heaven and other books, writer Andrew X. Pham has examined the experiences of Vietnamese who came to the United States after the Vietnam War. Filmmaker Ang Lee is famous for movies such as Crouching Tiger, Hidden Dragon, a martial arts film, as well as historical romances such as Sense and Sensibility, based on the Jane Austen novel. Singer-songwriter Norah Jones inherited her musical talent from her musician father, Ravi Shankar. Korean American Michelle Wie is a champion on the Ladies Professional Golf Association tour, while Japanese American speed skater Apolo Anton Ohno has won five Olympic medals.

Read this informative title to learn more about how Asian Pacific Americans contribute to the United States’ cultural mosaic, enriching our nation with a wide range of traditions, customs, and life experiences.