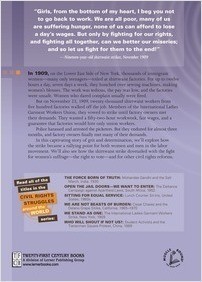 We Stand as One

“Girls, from the bottom of my heart, I beg you not to go back to work. We are all poor, many of us are suffering hunger, none of us can afford to lose a day’s wages. But only by fighting for our rights, and fighting all together, can we better our miseries; and so let us fight for them to the end!”―Nineteen-year-old shirtwaist striker, November 1909

In 1909, on the Lower East Side of New York, thousands of immigrant women—many only teenagers―toiled at shirtwaist factories. For up to twelve hours a day, seven days a week, they hunched over sewing machines, making women’s blouses. The work was tedious, the pay was low, and the factories were unsafe. Women who dared complain usually were fired.

But on November 23, 1909, twenty-thousand shirtwaist workers from five hundred factories walked off the job. Members of the International Ladies Garment Workers Union, they vowed to strike until factory owners met their demands. They wanted a fifty-two-hour workweek, fair wages, and a guarantee that factories would hire only union workers.

Police harassed and arrested the picketers. But they endured for almost three months, and factory owners finally met many of their demands.

In this captivating story of grit and determination, we’ll explore how the strike became a rallying point for both women and men in the labor movement. We’ll also see how the shirtwaist strike dovetailed with the fight for women’s suffrage―the right to vote―and for other civil rights reforms.

Laura B. Edge was born just north of Chicago in Waukegan, Illinois. She grew up in a big Italian-Irish family with lots of brothers and sisters. She loves to read, travel, dance, ride horses, and watch basketball games. Laura received her bachelor's degree in education from the University of Texas at Austin and studied abroad with the American Institute of Foreign Study. Laura has taught reading and writing in elementary schools, middle schools, and at a community college. In addition to teaching, Laura has worked as a computer programmer and owned and operated a computer training company. Laura uses her love of history to create books that bring the past to life. She enjoys research and uncovering little known facts.