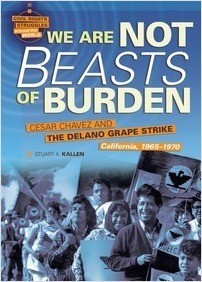 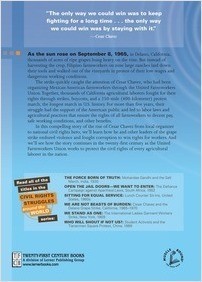 We Are Not Beasts of Burden

As the sun rose on September 8, 1965, in Delano, California, thousands of acres of ripe grapes hung heavy on the vine. But instead of harvesting the crop, Filipino farmworkers on nine large ranches laid down their tools and walked out of the vineyards in protest of their low wages and dangerous working conditions.

The strike quickly caught the attention of Cesar Chavez, who had been organizing Mexican American farmworkers through the United Farmworkers Union. Together, thousands of California agricultural laborers fought for their rights through strikes, boycotts, and a 250-mile (400-kilometer) protest march, the longest march in U.S. history. For more than five years, their struggle had the support of the American public and led to labor laws and agricultural practices that ensure the rights of all farmworkers to decent pay, safe working conditions, and other benefits.

In this compelling story of the rise of Cesar Chavez from local organizer to national civil rights hero, we’ll learn how he and other leaders of the grape strike endured violence and fought corruption to win rights for workers. And we’ll see how the story continues in the twenty-first century as the United Farmworkers Union works to protect the civil rights of every agricultural laborer in the nation.