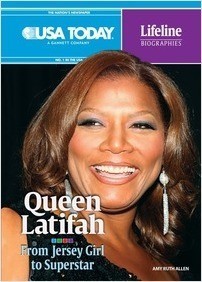 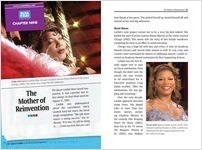 From Jersey Girl to Superstar

People who knew Queen Latifah as a kid in Newark, New Jersey, would never have guessed at the fame in her future. But Latifah always dreamed big. Her dreams—and hard work—paid off. While still a teenager, Latifah became the first female solo rapper to sign with a major label and earn widespread popularity. She crafted a unique style full of positive messages, completely changing the rap landscape.

That was just the beginning. Since 1989 Queen Latifah has made eight albums and thirty movies, starred in a top TV sitcom, hosted a talk show, launched business and charitable ventures, and won several prestigious awards.

As USA TODAY, the Nation’s No. 1 Newspaper, reports, it’s ordinary people who inspire Queen Latifah: “[A stranger once] told me how much I meant to her and to women of color, and women in general. When I hear that, I know that I’m doing the right thing.” What’s next for Latifah? The world will be watching, eager to find out.

“Each book contains background about social movements, fashion, and musical influences, plus excerpts from USA Today articles. Queen Latifah’s childhood and family life, as well as Lady Gag’s development of her persona, are covered in detail, while topics such as drugs and sexual orientation are also discussed. Fans won’t mind the crowded layout. Latifah has a glossary; Gaga has a timeline.” —The Horn Book Guide

“This very readable biography is a good starting place for curious fans.” --Booklist

A seasoned communications professional with 17 years experience in writing, editing, public relations, and media relations, Amy Ruth Allen has worked in the areas of arts management, higher education and children's literature. She is the author of several children's books, and her many articles have appeared in newspapers and magazines nationwide, including in The Washington Post, Mademoiselle, and Crayola Kids. She lives in Lynchburg, Virginia, with her husband Leigh Allen.