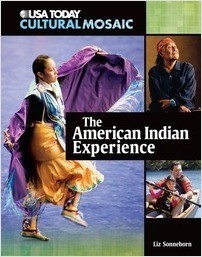 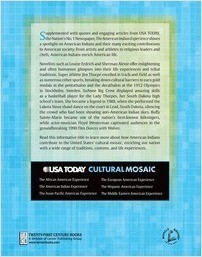 Supplemented with quotes and engaging articles from USA TODAY, the Nation’s No. 1 Newspaper, The American Indian Experience shines a spotlight on American Indians and their many exciting contributions to American society. From artists and athletes to religious leaders and chefs, American Indians enrich American life.

Novelists such as Louise Erdrich and Sherman Alexie offer enlightening and often humorous glimpses into their life experiences and tribal traditions. Super athlete Jim Thorpe excelled in track-and-field as well as numerous other sports, breaking down cultural barriers to earn gold medals in the pentathalon and the decathalon at the 1912 Olympics in Stockholm, Sweden. SuAnne Big Crow displayed amazing skills as a basketball player for the Lady Thorpes, her South Dakota high school’s team. She became a legend in 1988, when she performed the Lakota Sioux shawl dance on the court in Lead, South Dakota, silencing the crowd who had been shouting anti-American Indian slurs. Buffy Sainte-Marie became one of the nation’s best known folksingers, while actor-musician Floyd Westerman captivated audiences in the groundbreaking 1990 film Dances with Wolves.

Read this informative title to learn more about how American Indians contribute to the United States’ cultural mosaic, enriching our nation with a wide range of traditions, customs, and life experiences.

Liz Sonneborn has written more than fifty books for children and adults, including several titles for the North American Indian Nations series. She lives in Brooklyn, New York.