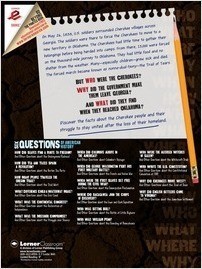 Why Did Cherokees Move West?

And Other Questions about the Trail of Tears

On May 26, 1838, U.S. soldiers surrounded Cherokee villages across Georgia. The soldiers came to force Cherokee families to move to a new territory in Oklahoma. The Cherokees had little time to gather their belongings before being herded into camps. From there, 13,000 were forced on the thousand-mile journey to Oklahoma. They had little food and no shelter from the weather. Many—especially children—grew sick and died. The forced march became known as nunna-dual-tsuny—the Trail of Tears.