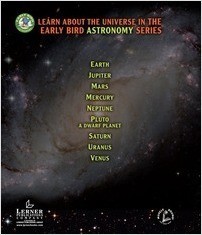 From the Series Early Bird Astronomy

Uranus is the seventh planet from the sun and the third largest in the solar system. Along with Jupiter, Saturn, and Neptune, it is classified as a gas giant – the large planets made mostly of gas and ice. The book describes Uranus’s place in the solar system, its rings and moons, its orbit, and the discoveries and space missions that have helped scientists understand the planet.

“The books are enhanced with mixes of space art and photography that has been reproduced with special attention to image sharpness and color clarity.”
—School Library Journal

Gregory L. Vogt is a senior project manager with the center for educational outreach at the Baylor College of Medicine in Houston. His duties focus on space biomedicine, teacher training, and work with graduate students and postdoctoral fellows. Vogt began his career as an eighth grade science teacher and later joined the NASA Aerospace Education Services Program. He established the Teaching from Space office at the NASA Johnson Space Center. He is a former science museum director. Vogt is an educational consultant and the author of many curriculum guides and more than 90 juvenile and adult science books.

Newly fluent readers will explore the solar system in this colorful and interesting series. Accessible text describes the unique features of each planet, its place in the solar system, its makeup, its satellites and rings, and how scientists have learned about the planet through space… View available downloads →