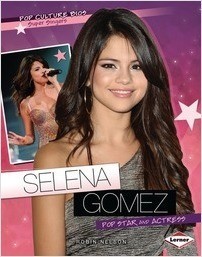 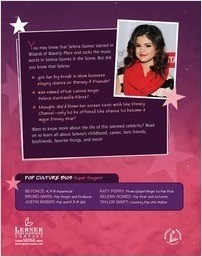 You may know that Selena Gomez starred in Wizards of Waverly Place and rocks the music world in Selena Gomez & the Scene. But did you know that Selena:
• got her big break in show business playing Gianna on Barney & Friends?
• was named after Latina singer Selena Quintanilla-Pérez?
• thought she’d blown her screen test with the Disney Channel—only to be offered the chance to become a major Disney star?

Want to know more about the life of this talented celebrity? Read on to learn all about Selena’s childhood, career, best friends, boyfriends, favorite things, and more!

“These crowd-pleasing titles will fly off the shelves. Written in shorts chapters and sentences, with easy font size, and filled with well-captioned, eye-popping photographs, they will draw in readers…. The writing style is engaging throughout.” —School Library Journal, Series Made Simple

Robin Nelson's careers have always kept her surrounded by books—as an elementary teacher, working at a publishing company, and now working as a school library media specialist. But her favorite job is writing books for kids. She has written many nonfiction books for children. She lives with her family in Minneapolis.