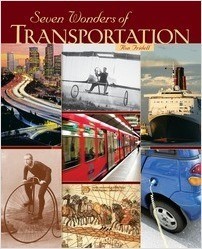 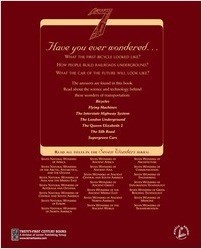 In every age, science and technology have advanced human civilization. From architecture to engineering, medicine to transportation, humans have invented extraordinary wonders. Transportation technology has seen significant changes over the centuries. Ancient people traveled on foot and on the backs of animals. People invented wheels and sailing ships, which helped them travel farther and carry larger loads. Fast forward to modern cars, subways, and airplanes and we’ll find that even the sky’s not the limit. In the twenty-first century, people are planning tourist flights into space. In this book, we’ll explore seven wonders of transportation. These wonders include roads and mass transit systems, including the ancient Silk Road, the London Underground, and the U.S. Interstate Highway System. The wonders also include vehicles such as bicycles, airplanes, spaceships, and the glorious ocean liner Queen Elizabeth II. The newest vehicles are “supergreen” cars, which save energy and help the environment. From the basic to the cutting edge, we’ll learn where transportation has been and where it’s headed.