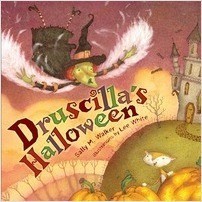 Did witches always ride brooms? No! In fact, long, long ago, witches crept about on tiptoe. On Halloween, they would scare children and cast spells . . . but always from the ground. No witch ever thought of flying—no witch until Druscilla. Druscilla was an old witch with the loudest, creakiest knees anyone had ever heard. But she was determined not to let anything spoil her element of surprise. One Halloween, after many failed attempts at sneaking up on unsuspecting villagers, Druscilla made a discovery that changed the course of witch history.

“In this underdog story set ‘a million spells ago,’”
—Publishers Weekly

“The blend of origin tale and Halloween story is a fresh one, and Walker’s clever imagery and lively turns of phrase add vitality to the text.”
—The Bulletin of the Center for Children’s Books