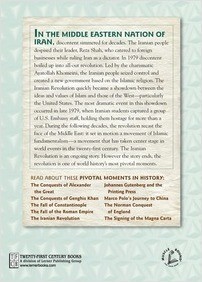 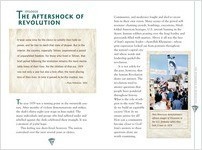 In the Middle Eastern nation of Iran, discontent simmered for decades. The Iranian people despised their leader, Reza Shah, who catered to foreign businesses while ruling Iran as a dictator. In 1979 discontent boiled up into all-out revolution. Led by the charismatic Ayatollah Khomeini, the Iranian people seized control and created a new government based on the Islamic religion. The Iranian Revolution quickly became a showdown between the ideas and values of Islam and those of the West—particularly the United States. The most dramatic event in this showdown occurred in late 1979, when Iranian students captured a group of U.S. Embassy staff, holding them hostage for more than a year. During the following decades, the revolution recast the face of the Middle East: it set in motion a movement of Islamic fundamentalism—a movement that has taken center stage in world events in the twenty-first century. The Iranian Revolution is an ongoing story. However the story ends, the revolution is surely one of world history’s most pivotal moments.

“Accessibly written and attractively designed, the text is complemented throughout with photographs, maps, and sidebars. Offer this insightful volume to YAs alongside Marjane Satrapi’s adult memoir Persepolis (2003), an account of her childhood experiences during the Iranian Revolution.”
—Booklist

“The book is well illustrated with photos and maps. It is clear, succinct, and easy-to-read.”
—Library Media Connection

“Iranian Revolution is the stronger of these two books. It begins with background on the role of Islam in Iranian history and describes the 20th-century conflict between the Iranian Shahs who wanted to embrace Western culture and the ultraconservative clerics, such as Khomeni, who wanted a society based upon Islamic law. January then objectively discusses U.S. meddling in and influence on Iranian affairs, the overthrow of the Shah, and the hostage crisis that brought the country into conflict with the West and left it open to attack by neighboring Iraq. He also analyzes the revolution’s descent into a ruthless regime that has left the country isolated and its people disenchanted. Feldman opens with a discussion of the city’s important strategic location. She then traces its history from Greek outpost to its fall to the Ottoman Turks, describing both the civilizations that controlled it and the endless battles fought to conquer it, and closes with a look at the city today. The somewhat dry discussion of its history is overly focused on the leaders and the battles they directed and is short on analysis of why its control was so important to so many empires. The maps are inadequate to help students locate the city and follow battle action. James A. Corrick’s The Byzantine Empire (Gale, 2006) is a more clearly written examination of Constantinople’s role as strategic gateway between East and West, and is a better choice. Both books have full-color and black-and-white photos and illustrations throughout.”
—School Library Journal