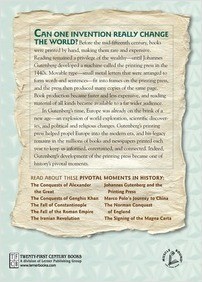 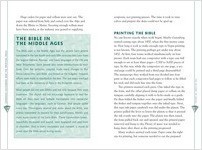 Johannes Gutenberg and the Printing Press

Can one invention really change the world? Before the mid-fifteenth century, books were printed by hand, making them rare and expensive. Reading and learning remained a privilege of the wealthy—until Johannes Gutenberg developed a machine called the printing press. Gutenberg, a German metalworker, began in the 1440s by making movable type—small metal letters that were arranged to form words and sentences, replacing handwritten letters. Movable type fit into frames on the printing press, and the press then produced many copies of the same page. As movable type and the printing press made book production much faster and less expensive, reading material of all kinds became available to a far wider audience. In Gutenberg’s time, Europe was already on the brink of a new age—an explosion of world exploration, scientific discoveries, and political and religious changes. Gutenberg’s printing press helped propel Europe into the modern era, and his legacy remains in the thousands of books and newspapers printed each year to keep us informed, entertained, and connected. Indeed, Gutenberg’s development of the printing press became one of history’s pivotal moments.