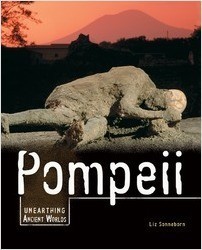 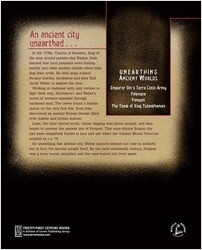 An ancient city unearthed… In the 1730s, Charles of Bourbon, king of the area around present-day Naples, Italy, learned that local peasants were finding marble and other ancient objects when they dug their wells. He sent army colonel Rocque Joachin Alcubierre and later Karl Jacob Weber to explore the area. Working in darkness with only torches to light their way, Alcubierre’s and Weber’s crews of workers tunneled through hardened mud. The crews found a marble statue on the very first day. Soon they discovered an ancient Roman theater filled with marble and bronze statues. Later, the crew moved south, where digging was above ground, and they began to uncover the ancient city of Pompeii. This once-vibrant Roman city had been completely buried in lava and ash when the volcano Mount Vesuvius erupted in A.D. 79. By unearthing this ancient city, Weber spurred interested not only in artifacts, but in how the ancient people lived. By the early nineteenth century, Pompeii was a busy tourist attraction and the once-buried city lived again.

“True to its series title, Unearthing Ancient Worlds, this illustrated volume presents the long-buried world of Pompeii through a history of archaeological work.”
—Booklist

“These clearly written titles are illustrated with large photographs and period artwork, and the pages are broken up with text boxes featuring quotes and interesting anecdotes. Through them, readers learn about the tedium, excitement, and danger of archaeological digs.”
—School Library Journal

Liz Sonneborn has written more than fifty books for children and adults, including several titles for the North American Indian Nations series. She lives in Brooklyn, New York.