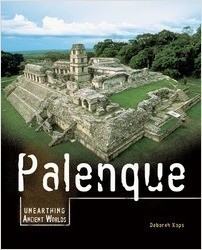 Mysterious ancient ruins, hidden deep in the jungle of southern Mexico… In May 1840, explorers John Stephens and Frederick Catherwood road their mules along a steep, muddy jungle path. They were hoping to find the ruins of an ancient, deserted site in Mexico they knew only from visitors’ accounts. Through the trees, they spied the remains of a crumbling stone palace. Palenque! In the weeks they spent there, the men discovered intricately designed buildings and mysterious glyphs, or symbols. Who built this city? What did the glyphs mean? The questions remained largely unanswered until the 1950s, when Mexican archaeologist Alberto Ruz Lhuillier began his work at Palenque. By this time, he knew the ruins were those of the ancient Maya, who lived across Mexico and Central America more than one thousand years ago. After exhaustive work, Ruz and his crew made an amazing discovery—a tomb buried deep inside a pyramid. Through intensive study of Mayan glyphs, they learned the tomb was that of the great Mayan king Pakal, who died in 683 A.D. Since then, archaeologists have discovered much more about Mayan pyramids, writing, and architecture. Read this intriguing volume to learn about Palenque and about the mysteries that still remain.

“Each volume begins with a snapshot look at life in the title city, then moves on to detail the first excavations at its site. Important figures involved in the historical digs are then introduced, and readers follow along as the archaeologists make their groundbreaking discoveries. Numerous sidebars, maps, and illustrations provide additional information about the sites and excavation details. Reading list, timeline, websites. Bib., glos., ind. Review covers these Unearthing Ancient Worlds titles: ‘Palenque and Pompeii.’”
—Horn Book Guide

“These clearly written titles are illustrated with large photographs and period artwork, and the pages are broken up with text boxes featuring quotes and interesting anecdotes. Through them, readers learn about the tedium, excitement, and danger of archaeological digs.”
—School Library Journal

Deborah Kops has written more than twenty books for children and young adults. She lives with her husband and son in Greater Boston, and enjoys visiting old historic cities along the Atlantic coast, such as Salem, Massachusetts, and Portsmouth, New Hampshire.